Though a little outdated, these spacecraft still are in use by the ESAD scientific research department. Those are some very nice looking ships. Please tell me that one of the Iphigenia class ships is named "Doubtfire".

Before maglev was the popular kid in train research, (IIRC) some German company experimented with ram air levitated trains, first driven by a propeller then by jet engines. They had rubber tired wheels to land and take off on a guideway. Once up to speed the wheels lifted and the train floated on a thin cushion of air between it and the guideway. While the system worked and had the potential for very high speeds and a fairly low cost infrastructure (track or guideway is a gigantic expense with maglev) the "airlev" never went beyond a test track due to excessive noise.

For smaller ships you could use an "air barrel". The ship flies into a short docking tube through which a large volume of air is being blown at a speed high enough to bring the ship to a stop relative to the ground. The ship is still flying even tough it's not moving. Landing clamps rise up to grab the ship, or it sets down on rests as thrust is reduced and the airflow is cut. From the barrel the ship on its carriage is moved to a terminal, servicing bay or a launch catapult.

Air barrels in the game = tons of ways for the player to screw up on harder difficulty levels.

At lower difficulty (and in a real world version) the landings would be done automatically. If the ALS is out a pilot would need to be spot on, a bit too much up pitch and the ship would be banging around like a rock in a clothes dryer, then spat out to tumble across the spaceport. Game Over, Player One.
Top

Hi Galane, thank you for your complement but what flatters me more is your interest

Yes, "airlev" is another possibility for keeping my giant ships in the air. Thing is though, most of these ships are being kept afloat by many different technologies. The maglev landing strips for example are indeed only for the larger ships, the ones that cannot produce enough power and downward thrust through ram jets or ion thrusters that they need extra support to land.
Smaller aircraft on the other hand, like the ship below (which is a W.I.P still) do have the ability to land without the use of maglev landing strips. You have plenty of nifty art if someone wanted to write some stories set in your Space 3000 universe.

I've started on plenty myself, just never finished any. There is plenty of room for spin-offs though, anything from Alexandrian space pirates to Earths major corporations and their scientific advances. It's basically this gun in ship-form: +1 for you if you instantly knew where it was from.

Best. Gun. Ever. Just don't press the red button on the bottom!
Top

Another re-work of an old render: 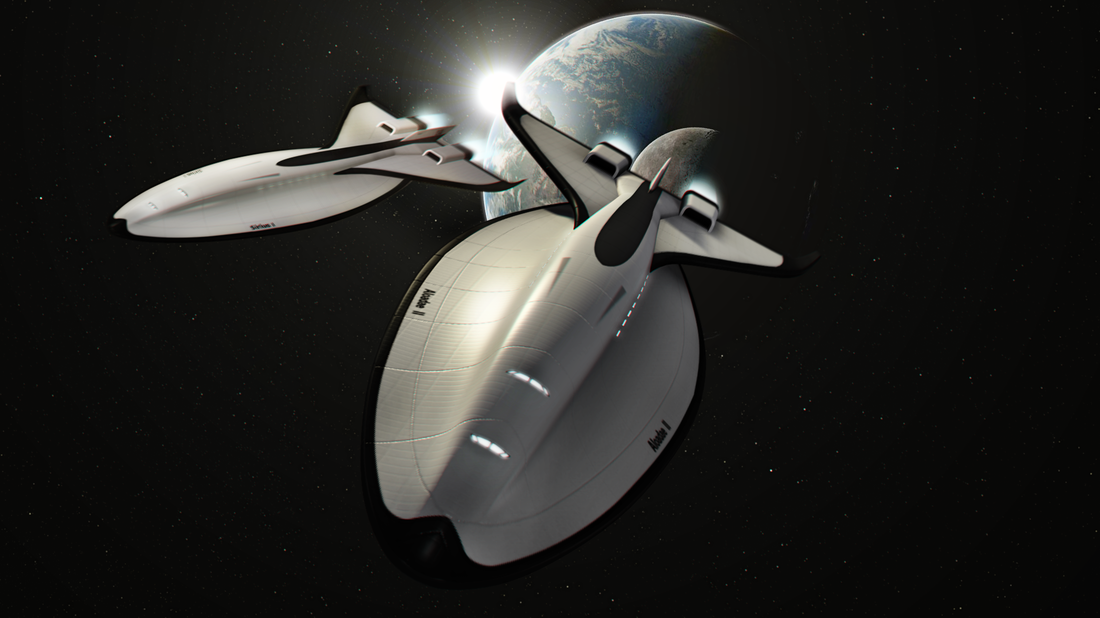 The Aloadae II, built Year 3094 and named after the historic first intergalactic spacecraft with its sister ship the Sirius I.